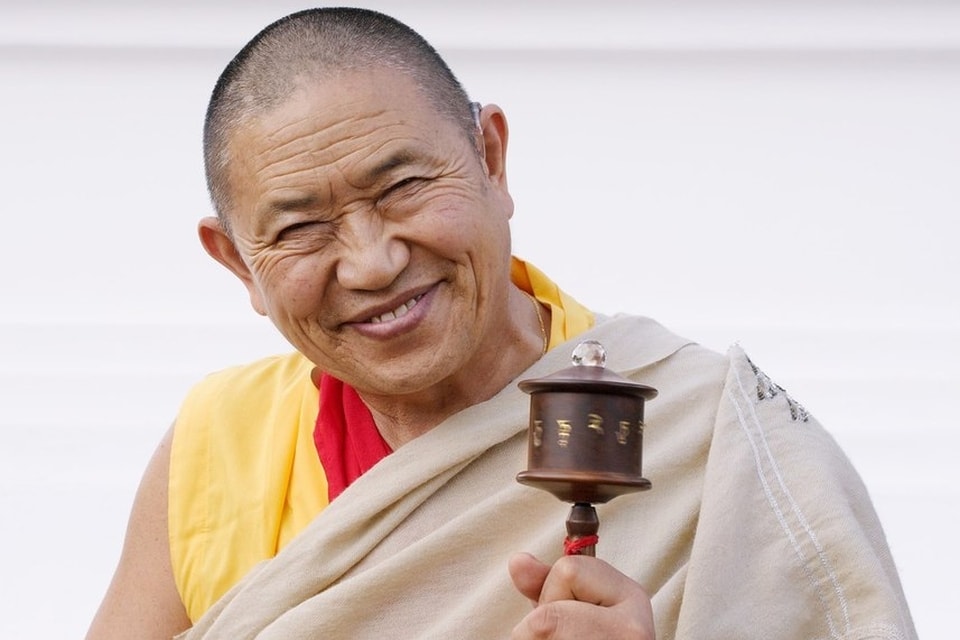 His Eminence Garchen Rinpoche is a Drikung Kagyu lama who was known in the thirteenth century as the Siddha Gar Chodingpa, a heart disciple of Kyobpa Jigten Sumgon, founder of the Drikung Kagyu lineage of Tibetan Buddhism. In ancient India, he had incarnated as Mahasiddha Aryadeva, the lotus-born disciple of the great Nagarjuna. In the seventh century, he was known as Lonpo Gar, the minister of the Tibetan Dharma King Songsten Gampo.

Garchen Rinpoche was recognized and enthroned in eastern Tibet by the former Drikung Kyabgon Zhiwe Lodro. When he was seven, he was brought to Lho Miyal Monastery, which he administered from the age of eleven. Studying and practicing under the direction of the Siddha Chime Dorje, Garchen Rinpoche received vast and profound instructions on the preliminary practices (ngondro), the fivefold practice of Mahamudra and the six yogas of Naropa.

Then, at the age of 22, after completing a two and a half year retreat, he was imprisoned for 20 years during the political turmoil of China’s Cultural Revolution. While in the labor camp, he received meditation instruction from his root lama, the Nyingma master Khenpo Munsel. Enduring hardship and practicing secretly, Garchen Rinpoche attained realization of the lama’s wisdom mind. Since his release from prison in 1979, Garchen Rinpoche has made great effort to rebuild the Drikung Kagyu monasteries, reestablish the Buddhist teachings, and build two boarding schools for local children in eastern Tibet. Rinpoche is the founder and spiritual director of the Garchen Buddhist Institute in Chino Valley, Arizona.
Garchen Rinpoche is known for his vast realization, as well as for his great kindness.