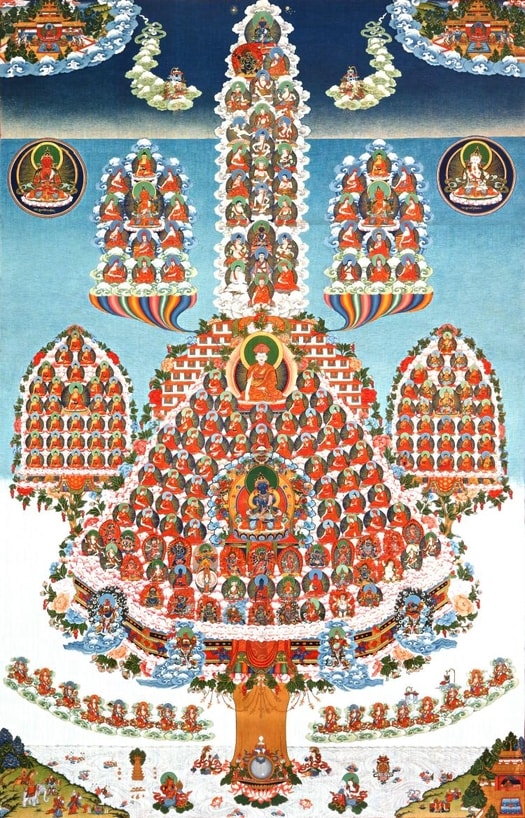 The Drikung Kagyu Lineage is one of the Kagyu lineages which was founded 800 overs years ago, by the great spiritual master, Kyoba Jigten Sumgon (Sanskrit; Ratna Shri). All these teachings were transmitted to Phagmo Drupa by  Dharma Lord Gampopa. Although Kagyu came from the same root, at that time the Kagyu lineage flourished into several different branches, each carrying the complete teachings and enlightened blessings. Like the wish-fulfilling tree, which comes from the same root, but is divided into different branches, each giving many wonderful blossoms and fruits. Although PhagmoDrupa had hundreds of thousands of disciples, Lord Jigten Sumgon was one of his closest and chief disciples. Phagmo Drupa prophesied that the teachings and blessings would be carried on by a Bodhisattva, (Jigten Sumgon), who already attained the ten Bhumis.

Phagmodrupa’s successor, Lord Jigten Sumgon, (1143-1217) who is the embodiment of the Buddha of the Three Times and a reincarnation of Arya Nagarjuna. He appeared at an auspicious time and place acting as an inspiration to those determined to be free of samsara. Early in his life he met with great masters, received all aspects of the teachings, and eventually encountered Lord Phagmodrupa, from whom he received the complete lineage teachings. To integrate these within his mind he practiced day and night until he attained Buddhahood in the Echung Cave at the age of thirty-five. At the request of humans and non-humans he established a monastery at Drikung Thil (1179) thus becoming the founder of the Drikung Kagyu order. His teachings were geared to his hearers’ through cultural differences and dogma, revealing the universal law of causes and conditions. Though he had hundreds of disciples, he never excluded any beings from his heart, wishing only to dispel their suffering and establish them in freedom from samsara. The embodiment of wisdom and compassion, he cut the link of their negative propensities. Lord Jigten Sumgon wrote many commentaries and explanations, especially the four volumes known as Inner Profound Teachings, in which he gives meditation instruction and advice. One of his foremost works, the Gong Chik, contains all the essential aspects of Vinaya discipline, Bodhicitta, and Tantra. This text has many commentaries, both in detail and concise, by such masters as Sherab Jungne, who was Lord Jigten SumgonÕs own disciple, the 8th Karmapa, the Fourth Shamarpa, and Drikung Dharmakirti.