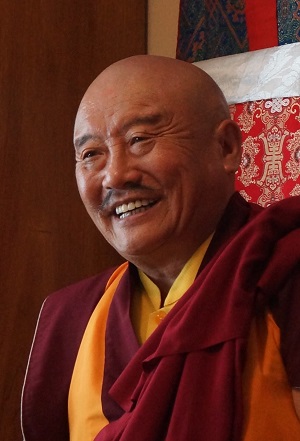 Drikung Lamchen Gyalpo Rinpoche was born in 1939 in the Nangchen region of eastern Tibet as the reincarnation of Lama Phurga (1883-1938). Lama Phurga was famous for his ability to see into a person’s past, present and future lives. After his death the search for his reincarnation began with the submission of candidates’ names to H.H. the 34th Drikung Kyabgon, Shiwai Lodro. H.H. wrote down the zodiac signs and birth years of the parents and the new Tulku.
For the location of the family, H.H. the 16th Karmapa found in meditation the name of the mother.
H.E. the Tai Situ Pema Wangchen wrote a letter to the father of the new Tulku.
At the age of five, he was enthroned as a Tulku in accordance with prophecies and started traditional Buddhist training in Lo Lungkar Gon monastery.
From His Holiness the 16th Karmapa, Gyalpo Rinpoche received such profound teachings as Mahamudra, and Karmapa Rangjung Dorje’s Tsig-chigma; from Situ Pema Wangchog, Abishekas, commentaries and experiential insight; from Zigar Kongtul Rinpoche, Rinchen Terzo and Abishekas, commentaries, and transfer of experiential insight on all Yidam deities; from Ripa Seljey Rinpoche, Karma Kagyu empowerments and teachings; and from Dilgo Khentse Rinpoche, Nyingmapa tantras, sadhanas, and experiential insight in general and Nyingthig Yabshi teachings in particular.

The teachings of such profound masters were practiced from the Preliminary to the stages of Arising and Completion, punctuated with retreats and propitiation of deities which included three Major retreats and Yidam Propitiations.

“Presenting himself in many appearances” Gyalpo Rinpoche was a regional lord/administrator, he is also a Tulku, a monk, was a bureaucrat, and a lama in different aspects while dwelling in the same unchanging essence.

In a successful effort to reach out to Lineage followers, Gyalpo Rinpoche toured every single Drikung monastery from the regions in Eastern Tibet to Mt. Kailash. He also assisted His Holiness the Drikung Kyabgon Rinpoche with the history of Drikung and other such writings and helped to hang on to the “dharma lifeline” at such difficult times as in the beginning. Not unsimilar, Gyalpo Rinpoche also created the basic conditions to enable the establishment of the Seat of Dorje Drag – the lifeline of Nyingmapa Tradition – in Simla as well.

In his youth, Gyalpo Rinpoche was also Vajramaster, Regent, and Chant Master of the former Lo Bongtul Rinpoche at his monastery, Lungkar Thubten Shedup Ling while he was in retreat.